When Ryan Roberts told his family he wanted to earn his bachelor’s degree, there was a collective pause.

How would he earn a degree when his job takes him 10,000 miles away for more than half of the year? How would he find time for coursework and the Youngsville preschool he co-owns with his wife Amy? How would homework happen for him as well as for his son Hudson?

Endurance, time management, and a lot of support.

“Sometimes you can’t see the way. You have to deal with it on a daily basis,” Roberts, 45, says. “You have to wake up every morning and look at how your day is and schedule accordingly. If not, you become overwhelmed and give up from the beginning.”

Roberts didn’t give up. Thanks to his family's support and the flexibility of the University of Louisiana at Lafayette's General Studies online program, he'll receive his bachelor's degree this week.

More Than a Degree

Roberts first enrolled at UL Lafayette almost 20 years ago, dividing his time among nursing clinicals during the day, working operations dispatching at nights and on weekends, and working in the oil industry during summer breaks to earn money for books and tuition. Ultimately, opportunities in the industry lured him away from his He progressed in his field, becoming a project operations manager. And while his position called him to Australia for much of the year, he and his wife Amy achieved their dream of operating a preschool together — Creative Minds — in 2004.

But Roberts says he realized he needed to get ahead of changes as both a business owner and an employee.

“Society and technology changes at a rapid pace; you’re left behind or struggling to keep up,” Roberts says. “Enrolling helped me be more effective and efficient in how we were doing business.”

Roberts says he chose General Studies because he didn’t just want a degree, he wanted online courses that were applicable to who he was, his experience, and what he wanted to achieve.

“The General Studies program offered diversity, allowing me to choose those specific disciplines where I wanted to focus my attention,” he says.

“It allowed me to use my hard-earned credits from the nursing program while advancing my education in technical writing, computer literacy, ethics, management of behavior and organizations, industrial and organizational psychology, organizational leadership, E-business, and more.”

When he learned about UL Lafayette’s online degree programs, he knew it was the right path, but Roberts was intimidated by the prospect of returning to school after 20 years and embracing a completely different format.

“There was a fear factor involved,” he says. “This is more responsibility, in my opinion. You have to manage your time and teach yourself along the way. The dynamics are completely different.”

But he found a connected and supportive environment, whether he was completing his coursework in Youngsville or across the world.

“One of the instructors last semester, with the help of the IT department, helped me find a workaround to gain library access,” Roberts says. “It’s great. Those resources are there, they’re abundant and they helped me to be a better student.”

“We learned from each other by doing. We were able to share ideas and concepts through various forums and projects during the semester,” he says.

“Being an older student allowed me the opportunity to share my years of experience in the business world with other students during the semester. The best connections were working team projects such as the development of a business from design to delivery.”

Staying Ahead [of Central Standard Time]

Time management wasn’t listed on any of Roberts’ syllabi, but he says he had to quickly develop that skill to accomplish his coursework, especially because most days he’s in another time zone, 13 hours ahead of instructors and peers.

Roberts says he printed his syllabi each semester, and he checked his courses constantly in Moodle through the UL Lafayette mobile app.

“There is little room for procrastination in the online program,” he says. “Staying ahead of technology and the coursework is a fundamental requirement.

“[Online courses] taught me to look for opportunities when I could read that chapter, or get online, or do a bit of research. If I didn’t take advantage of those moments, I was falling behind.”

Being able to carve out time to study at home, Roberts says, couldn’t have happened without his wife.

In addition to managing the day-to-day operations of Creative Minds Preschool, Amy had to manage the household and their son’s extracurriculars.

“Amy picked up a lot of the responsibilities at home to allow me to focus and study because she wanted this to happen for me; she knew how important this was for me,” Roberts says. “She’s been tremendously supportive and patient. I’m forever grateful for that.”

The pair has experienced an unexpected benefit from their hard work. Their 10-year-old has become more proactive about his academics, says Roberts.

“Hudson has learned by example. He sees me up late at night; he sees the results of my tests. We often spend most of our time studying and learning from each other,” says Roberts. “His grades are up, and we don’t have to stay on him about his homework.”

Roberts says pursuing his degree has made him more equipped for the present as he plans for the future, serving in a more globalized role for his company.

“Since enrolling in the online program, I am better prepared for the future with the ability to do more,” Roberts says. “I’ve gained fundamentals from diverse disciplines to effectively shape and structure business environments from a broader spectrum of sound theories.”

This bachelor’s degree will serve as a stepping stone for Roberts. He says he’s interested in pursuing a Master of Business Administration in globalization or related specialty.

Prepare for your future through the University of Louisiana at Lafayette’s Online Programs. Request information today about admission requirements for General Studies or one of our other four online undergraduate degrees. 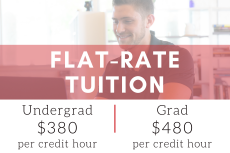